Be there, everywhere, with..Little Look-a-Likes.

As a busy mom of four little ones years ago, there were time-many times-when Lori Reader wished she could clone herself.

One day she did, sort of.

“I need one of me for each of my kids, so a friend tried to help by making a doll of me,” she said.

“My son took it to pre-school and all the other kids wanted it.”

That led Lori to a brainstorm: Why not create dolls that could comfort the likenesses of loved ones who may live far away, or travel frequently, or may have even passed on? The Little-Look-a-Like doll business was born.

Reader began selling the dolls to the parents of her children’s schoolmates. Primarily through word-of-mouth sales, Little-Look-a-Likes can now be found in every state and in 15 countries.

Customers send in a headshot of themselves, which is then incorporated as the head in a huggable soft doll dressed in jeans and t-shirt. The little shirts can be further customized with a special saying, a favorite sports team logo or college insignia. A 10-second re-recordable voice chip adds a familiar voice to the mix. Special outfits are also available. The dolls were sized at 20 inches so they can be further outfitted with newborn and doll clothing.

The dolls have had their 15 minutes of fame, and then some. The popular venture funding shoe Shark Tank flew Lori to California for a possible feature, and although the company proved too young, the producers and starts were enthralled and ordered Little-Look-a-Likes to give as presents.

Little Look-a-Likes have starred on television in the George Lopez Show. Other Hollywood celebrities, including stars of Good Girls, have also fallen for the dolls’ charms, said Reader.

Tiffany Rosenfield of Indian harbor Beach purchased a doll in her own image recently. With children ages 10 and 22 months, and a busy schedule managing a hair salon in downtown Melbourne, Rosenfield is definitely in he ‘need-a-clone’ category. The kids, especially 22-month-old Preston, cannot get enough of the mini-mom, and the doll particularly well-loved when Tiffany is at work or when the family visits grandparents.

Reader is appreciative and amazed at the feedback she has received from happy customers. “I have so many heartfelt messages,” she said.

One customer related the story of a special tea party her young daughter had with her grandmother. Grandma lived thousands of miles away, but her Little Look-a-Like filled in at the special event.

Children whose parents have been deployed overseas can still feel near to them with a hug, thanks to the Little Look-a-Like. The dolls are perfect for couples in long-distance relationships and to remind children of separated parents that they are loved by parents, even if they only live with them part of the time. They can soothe children with autism and adults suffering from Alzheimer’s

Some Little Look-a-Likes serve as memory dolls for loved ones who have passed away. Kids adore mini-me versions of themselves. They make unique retirement, graduation, wedding and gag gifts.

“A customer once ordered 13 of them to give to all his nieces and nephews,” said Reader. 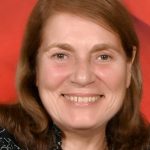 Maria is a prolific writer and most excellent proofer for various Space Coast publications and an adjunct professor at Florida Institute of Technology’s Nathan M. Bisk College of Business. When not writing, teaching or traveling, she can be found waging a one-woman war against her lawn and futilely attempting to maintain order among the chaos of a pack of extremely clueless wirehair dachshunds and an angst-driven basset hound.

Maria is a prolific writer and most excellent proofer for various Space Coast publications and an adjunct professor at Florida Institute of Technology’s Nathan M. Bisk College of Business. When not writing, teaching or traveling, she can be found waging a one-woman war against her lawn and futilely attempting to maintain order among the chaos of a pack of extremely clueless wirehair dachshunds and an angst-driven basset hound.