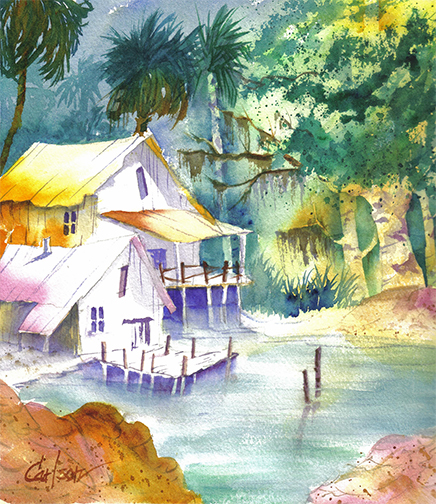 Edwin Carlson, August Artist of the Month at Studios of Cocoa Beach

The Studios of Cocoa Beach, 165 Minuteman Causeway in downtown Cocoa Beach announces its August Artist of the Month, Edwin Carlson of Satellite Beach.  Ed has been a watercolorist for 20 years.  He has won numerous awards for his atmospheric watercolors depicting life along the waterways. He studied with nationally known artists and now his love of watercolors with others by teaching at the Studios and elsewhere

As a sailor, Ed cruised throughout Florida and the Bahamas.  He celebrates this cruising lifestyle with a paintbrush and an eye for nautical and tropical beauty.  “ I love the spontaneity and magic of watercolors and the unique way in which watercolors capture the essence of the tropics and the effect of light upon water”.  Though on occasion he will do a few snow scenes portraying his upbringing in Indiana and upstate New York.  When he’s not painting Ed can be found at the Surfside Playhouse, both on stage and behind the curtain, or out sailing, motorcycling and SCUBA diving.

A print of Ed’s painting “ Rum Cove “ is the prize in the Studios’ FREE monthly giveaway. You can enter in person or click on the QR code displayed in the Studios window.  At this time, the Studios of Cocoa Beach is open for limited hours, Friday 3:30 to 8pm, Saturday 11 am to 8 pm and by appointment.  This is subject to change, so call 321-613-3480 to confirm hours or make an appointment.   You can view profiles of the Studios artists, see more views of Ed’s work, and learn about this non-profit gallery at www.studiosofcocoabeach.org.

The event is finished.