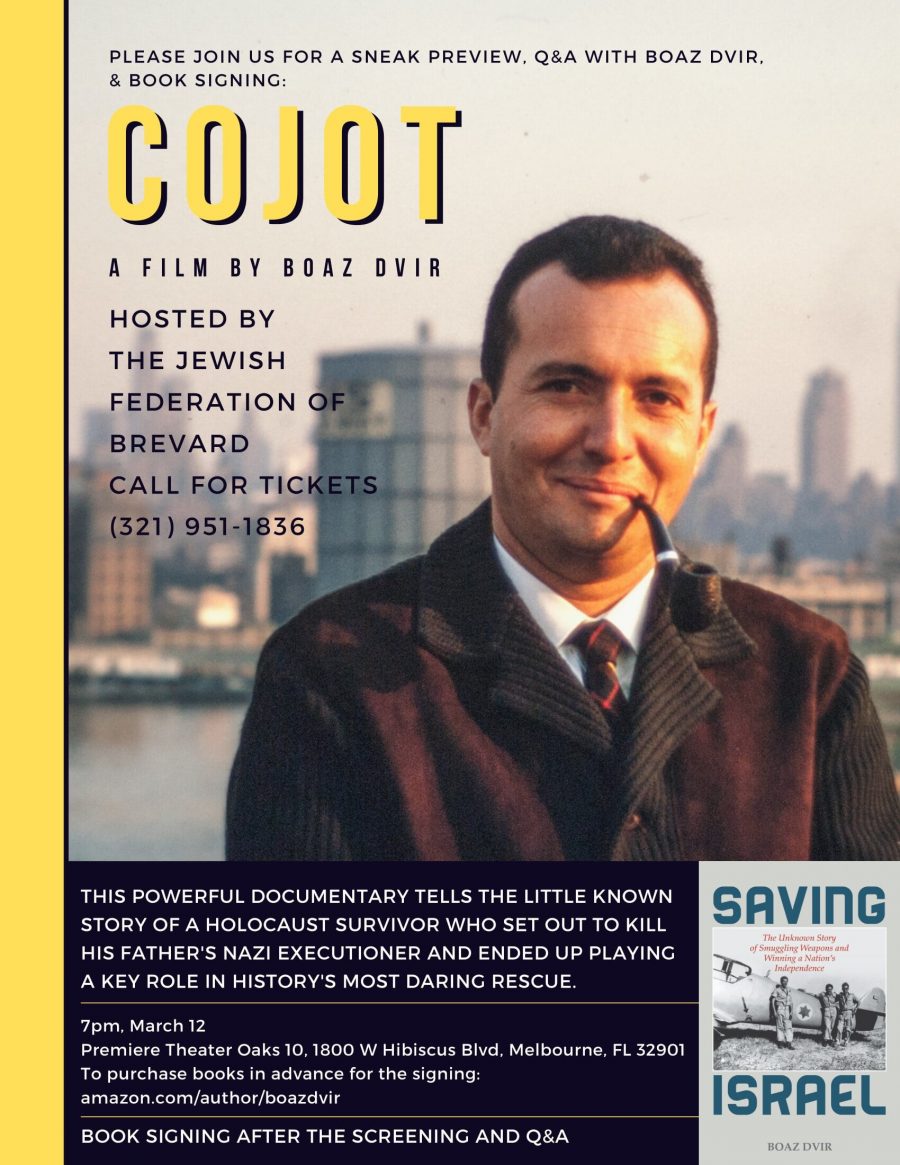 Jewish Federation of Brevard Shines a Light on Israeli Operation

At 7 pm March 12, 2020 the Jewish Federation of Brevard will host a sneak preview screening of “Cojot” a film by award-winning filmmaker Boaz Dvir (“A Wing and a Prayer,” “Jessie’s Dad”) and a book signing by Dvir celebrating the publication of his new book, “Saving Israel: The Unknown Story of Smuggling Weapons and Winning a Nation’s Independence.” The event will be held at Premiere Theaters Oaks 10 in Melbourne.

“Cojot” tells the little known story of Michel Cojot, a Holocaust survivor who set out to kill his father’s Nazi executioner and ended up playing a key role in history’s most daring hostage rescue, the Jewish State’s 1976 Operation Thunderbolt at Entebbe, Uganda. Narrated by iconic actor Judd Nelson—John Bender in “The Breakfast Club”—”Cojot” has been generating a buzz. Several publications, including Haaretz and the Los Angeles Jewish Journal, have written feature articles about it, and National Public Radio station WPSU devoted an episode of its “Take Note” to it. After watching an early rough cut, The Guardian’s Hadley Freeman wrote: “It wasn’t until I saw Boaz Dvir’s very moving forthcoming documentary about him, ‘Cojot,’ that I truly understood Michel’s life, and perhaps the message of it.”

Dvir’s new book “Saving Israel” tells the story of World War II aviators who raced against the clock to prevent what they viewed as a second Holocaust. “The American Jewish and Christian role in helping Israel win its War of Independence in 1948 is little known in the US or Israel,” said Ralph Lowenstein, dean emeritus of the University of Florida College of Journalism. ‘Saving Israel’ is a revelation.”

“Drawing on over two-dozen interviews, Dvir’s book brings this incredible chapter in Israel’s early history to life,” said Miriam F. Elman, associate professor of political science at Syracuse University. “What motivated these men to fly for Israel at a time when its survival hung in the balance? ‘Saving Israel’ is a must read for anyone interested in military history and learning more about America’s war heroes.”

Dvir, a Penn State University Assistant Professor who directs the Holocaust, Genocide and Human Rights Education Initiative at Penn State, has spent more than a decade researching “Saving Israel” and “Cojot.” In 2015, the Jewish Federation of Brevard was among the first to host Dvir and screen his documentary “A Wing and a Prayer” and it sold out quickly.

Narrated by actor William Baldwin, the hour-long film aired on PBS in 2015-17, won Best Documentary at the 2016 Fort Lauderdale International Film Festival, and was shown at such venues as the Los Angeles Museum of Tolerance.

After the screening of “Cojot,” Dvir will answer questions and will sign copies of “Saving Israel: The Unknown Story of Smuggling Weapons and Winning a Nation’s Independence.” A limited number of books will be available for purchase at the event. The book is available at Amazon, Barnes & Noble and Target, as well as other websites and stores.

“I’m excited to return to this wonderful community,” said Dvir, a University of Florida alum. “I’m honored to present ‘Cojot’ and ‘Saving Israel’ in Brevard County. I very much look forward to reconnecting with friends and hearing their feedback.”