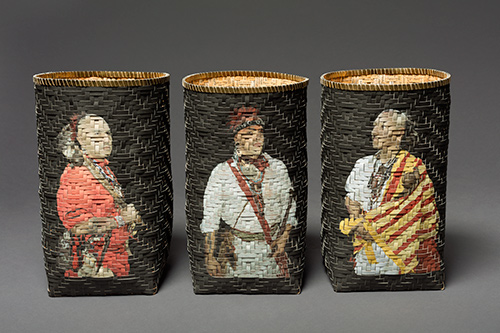 Artists Pat Courtney Gold (Wasco), Shan Goshorn (Eastern Band of Cherokee), and Gail Tremblay (Onondaga/Micmac) address Native- and European-American encounters in their contemporary baskets. Weaving modern media, including 16 mm film and digital photographs, into traditional forms with time-honored techniques, these women present viewers with the historical documents that authorized colonization and the stereotypical images that continue to shape popular perceptions of Native life. In doing so, they create new encounters between past and present – as well as between indigenous and non-Native peoples – that underscore the union of remembrance and resistance.

Dr. Kristin Schwain is Associate Professor of American Art at the University of Missouri. She was awarded a B.A. in Art History and Humanities from Valparaiso University and a joint PhD, in Art History and Humanities from Stanford University. Her first book, Signs of Grace: Religion and American Art in the Gilded Age (Cornell University Press, 2008), examined how late-nineteenth-century American artists drew on religious beliefs and practices to explore new relationships between viewers and objects, and how beholders looked to art in order to experience transcendence and save their souls. Her recent research seeks to complicate the story of American modernism by examining the roles played by religion, race, region, and consumption in the production, display, and reception of American visual and material culture.

Edwin Carlson, August Artist of the Month at Studios of Cocoa Beach

Vote for your favorite businesses in the Health In

Our next stop on our 'Access the Globe…Right Dow

Since COVID-19 has put a damper on summer travel,

There is nothing like floating down the river with

On its own, the volcano is imposing and impressive