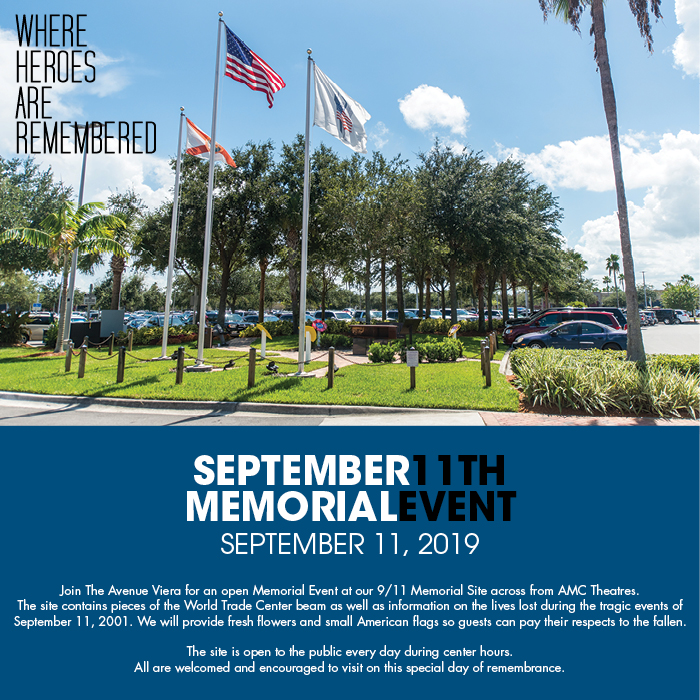 Viera, FL., August 26, 2019 – The Avenue Viera invites guests to visit their World Trade Center Memorial Site on September 11, 2019. The Memorial Site is located across from AMC Theaters and is open every day during Center hours. On this special day of remembrance, there will be fresh flowers and American flags available for guests to pay their respects to the fallen.

The Avenue Viera’s World Trade Center Memorial Site is home to a seven-foot long, one-ton steel beam that was recovered from the rubble of the World Trade Center after the terrorist attacks on September 11th, 2001. In 2012, the Kennedy Space Center Fire Fighters and the Transport Workers Union (TWU) of America petitioned the Port Authority of New York and New Jersey for a piece of the World Trade Center steel to serve as a memorial at Kennedy Space Center Fire Station 1. Nearly three years later, the petition was granted and the beam was transported to the Space Coast.

To allow more public access to this hallowed object, the Kennedy Space Center Fire Fighters and TWU Local 525 moved the artifact to The Avenue Viera on May 27, 2017. More than $55,000 in donated materials and labor enabled The Avenue Viera’s World Trade Center Memorial Site to be constructed as a permanent gift to the community.

“We wanted to make this event an open house to recognize what a solemn day this is in our Nation’s history but also to give as many people that want to pay their respects the ability to do so,” said Michelle Bujold, The Avenue Viera’s Marketing Coordinator. “Guests can visit at their convenience and stay as long as they wish.”

For more information on the World Trade Center Beam’s move from New York to the Space Coast, visit TWU525.com.

…
About The Avenue Viera:

The Avenue Viera is an outdoor lifestyle center concept in Viera, Florida consisting of 600,000 square foot of lifestyle tenants on 62 acres. Visitors can enjoy palm tree lined sidewalks, a Central Park green space, a pop-jet fountain, patio dining and storefront parking. The Avenue offers a dynamic mix of premier national retailers, select local merchants and specialty restaurants reflective of the local demand and fashion trends. The Center is situated on Florida’s Space Coast and conveniently located off I-95. It represents resort style living and outdoor recreation.

The event is finished.

Downtown Cocoa Beach will soon be buzzing with an

It’s likely you will see Jennifer Cleveland, @in