“And DOWN the stretch they come...”

That was the booming and memorable call of Triple Crown television announcer Dave Anderson as a throng of strong and steady thoroughbreds bounded for the finish line, nostrils flaring and hooves seeming to hover over the track. This high-stake race, the mother of all horse races – comprised of three races for three-year-old Thoroughbred horses – is considered among the most exciting few (two) minutes in sports.

Very few racehorses make it to the Triple Crown. Most spend their short careers enticing bettors at small tracks, competing for modest purses. Usually before they reach middle age in horse years, they are retired and done with racing.

A few lucky ones, the high stakes winners, are syndicated and put out to stud at breeding farms and lush green pastures in places like Ocala or Lexington, Kentucky. Some unlucky ones end up in slaughterhouses in Canada or Mexico. (Slaughterhouses for horses are currently banned in the United States.)

And then there are those who retire at places like HART (Hidden Acres Rescue for Thoroughbreds) in Port Saint John, just west of Cocoa.

Led by founder Suzee Norris, an avid equine rider since she was seven years old, these magnificent beasts are rehabilitated from racing and groomed for adoption. Many of the horses come to HART “over-worked, used and abused,” said Suzee, who opened the nonprofit in 2006 after work as a civil engineer.

The stallions are gelded and can’t be used for breeding or racing. Most become welcome members of their adopted families and are used for recreational or dressage riding. Some are boarded long-term at HART for additional training and extended care. The normal life span of a thoroughbred is 25-30 years, so most have a long lifetime away from the racetrack.

HART is a member of the Thoroughbred Aftercare Alliance and their horses are received via the Jockey Club of the United States and the Alliance, which offers grants to help pay for care and treatment. Other funds are raised by the sale of horses and through donations.

When a horse first arrives at HART, handlers will evaluate the animal for medical issues and prescribe needed medication and treatment, including even massages and chiropractic care.

The most common injury to horses is to the ankles, with fractures and bone chips.  A vet treats them with pins and screws and may even do surgery to remove bone chips. Tendon and ligament damage to the front legs is also common. In cases of injuries the horse is placed on “stall rest” for a month or two, followed by a period of limited exercise without riders.

One of the prized residents at HART is “Reservado”, a 13-year-old from Puerto Rico. He raced 106 times and often finished in the money. These days at the horse ranch, he lives a leisurely life and prepares for adoption. “He’s a super cool horse,” says Suzee. “We’re just making him happy, getting his body healthy.” She doesn’t anticipate any problems finding him a forever home.

Typically, thoroughbreds are kept at HART for three to six months, although some stay longer. When it’s time for adoption, fees range from $500 to $2,500, a bargain for a thoroughbred. Some horses, with lengthy training and a pedigree background, can fetch as much as $15,000 to $20,000, according to current listings on the HART website.

There are dozens of TAA approved horse rescue farms in the country, with seven others in Florida besides HART. The Cocoa horse farm was originally opened as an equestrian center in 2006 and transitioned to a nonprofit with TAA accreditation in 2011.

Suzee says most adoptions are local. One thoroughbred recently was sold to the Orange County Sheriff’s office in Orlando. She says the adoption rate is 100%, noting that the few returned during a 30-day trial period are immediately put back up for adoption.

THE RESCUE GOES BOTH WAYS

“We’re rescuing horses, but in fact they rescue us,” says Suzee,

explaining that both horses and their volunteer handlers evolve as they work together and establish trust and a bond.

“Volunteers change as human beings.” And the horses become calmer as they adjust to the relaxed pace at HART.

After a strenuous and regimented career at the track, thoroughbreds “become almost lazy” when they reach retirement…an almost human quality. But as Suzee says, “every horse we touch is magic” and calls it an emotional experience to watch the horses evolve.

“We are the safety net.”

To learn more or volunteer, visit online at: hartforhorses.org

To see a list of horses available for adoption, visit hartforhorses.org/share-the-care

Each horse is listed with background information and the expected adoption price.

Fred Mays is a freelance writer and photographer who resides in Satellite Beach. He is a retired television journalist, and active on media issues with the Brevard Indian River Lagoon Coalition. His blog is www.floridaunplugged.net. 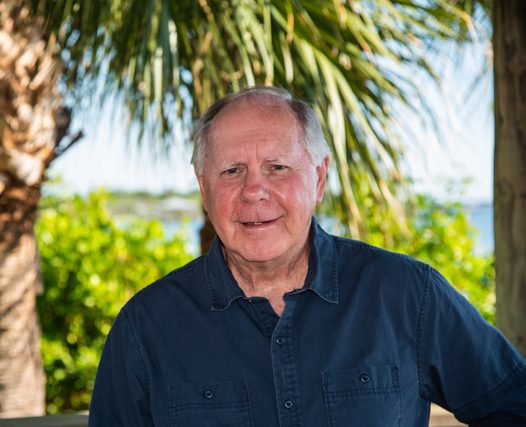 Fred Mays is a freelance writer and photographer who resides in Satellite Beach. He is a retired television journalist, and active on media issues with the Brevard Indian River Lagoon Coalition. His blog is www.floridaunplugged.net.